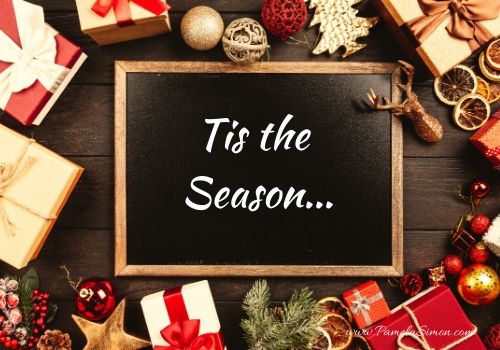 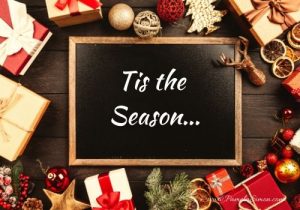 As I approach my 10th Christmas without Larry, I can’t help but reflect on how different each holiday season has been. I’ve been hit with quite a bit of nostalgia these past few weeks, especially now, as my kids are older and venturing off on their own paths.

I feel as if I can totally relate to Ebenezer Scrooge, from A Christmas Carol, who after being visited by Ghosts of Christmas past, present and future, he had a change of heart from a scrooge to a kinder, more gentle man. Yes, in the early years after Larry passed away, I felt like a scrooge.

My heart will always ache for the presence of Larry when I wake up Christmas morning, but I do have many memories to carry me through the day.

Ghost of Christmas past

Unfortunately, memories can also be painful. The first Christmas without Larry was the most difficult and every memory, no matter how pleasant, was a punch in the gut. Everywhere I turned I was confronted with memories that were a reminder of the wonderful life I used to have.

The holiday season used to be my favorite time of year. As a kid I used to love to help decorate the house, make cookies and watch all the classic holiday programs on television. Christmas day we had our extended family over for a big dinner celebration. Traditions were created and followed without fail each year. One could’ve video-taped the scene and hit replay each year that followed, the only exception is that we aged from year to year.

When Larry and I got married and had children, I couldn’t wait to create some new traditions for our family. 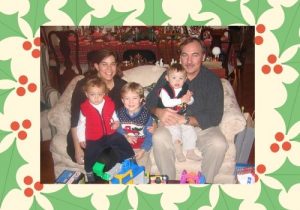 I relished in decorating the house once more! Having children and experiencing the joy through their eyes, really does make the holiday season seem like a miracle.

There were a few traditions I established when the boys were toddlers. Each year I would take the boys to Winter Wonderland at Navy Pier. Sometimes we went more than once!

Then, after putting the boys to bed, Larry and I would watch, It’s A Wonderful Life. Of course, each year I always fell asleep and afterward Larry would wake me up with a grin on his face and say something like, “Well, you missed it again!”

When the boys were old enough, we (ok, me!) added to our traditions by scheduling an outing to the Chicago Symphony Orchestra for their annual Christmas Yuletide production. It was fantastic.

Hanging on to traditions

Larry passed away a little over two months prior to Christmas in 2010. I was in such a state of shock and heartache that I really wanted to skip over all the holiday celebrations that year. But, when you have three kids under 10, there’s no way that could happen. Nor did I want to, for their sake. Instead, I did what I thought would be best for them and tried to carry out some of the traditions we had established.

We went back to Chicago to spend the holiday with family. I didn’t know what to expect, but I had hoped going back to Chicago, I would feel Larry’s presence and all the traditions we had experienced together would put some holiday spirit back into my heart.

Little did I know, no matter what I did, it will never be the same, was the theme of that trip. Ghost of Christmas past haunted me at every turn.

We went to Winter Wonderland. Of course, the boys had fun. They went on the same rides, laughed, ice skated, ate junky food. I put on a smile, cheered when they made it to the bottom of the slide, oohed and aahed at the decorations. All the while I fought back tears.

I got tickets to the Holiday program at the Chicago Symphony again. One of Larry’s best friends, Chuck, (who has since passed away) and his family went with us. I was grateful to have someone who was close to Larry, share in this tradition, but it wasn’t the same.

On Christmas Eve, my brother and sister-in-law, broke their own tradition that year and generously invited the boys and I to have dinner with them. Again, it was comforting to be surrounded by family, but it wasn’t the same.

I was overwhelmed with love and support from family and friends. But beaten down by grief and couldn’t wait for the holiday’s to be over.  That first year the traditions were constant reminders of what I lost.

Before the 2011 holiday season we welcomed the wonderful addition of our new puppies, Star and Cruiser. The boys wanted to spend their first Christmas with the dogs, which meant we wouldn’t travel to Chicago. I had mixed feelings, because it would be the first time, I didn’t see family or friends at all during the holiday season, but a part of me was relieved. I didn’t think I could take another year like the one before. 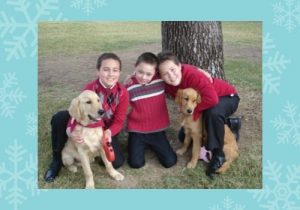 Without knowing it, we started to create new traditions.

We went to the train park (Scottsdale has an awesome light display at the train park!), we went to zoo lights in Phoenix. On Christmas Eve, the boys sang in the children’s choir at the mass, then we went out to dinner. It was the first time I had eaten out on Christmas Eve. I liked it!

One tradition we started, and continue, is to light a candle at the Christmas dinner in honor of Larry and all our loved ones who have gone before us. It is our way of inviting Larry into our celebrations. It may not be the same as having him here physically, but it’s all we have.

Since my kids have grown, they no longer want to do some of the “traditional” holiday activities, zoo lights and the train park are not their thing anymore. Yet, I’m finding ways to cope. Instead of zoo lights, I’ll visit the Botanical Garden, which has a beautiful display of Luminarias, with some friends. Instead of the train park, we’ll choose an activity that is more age appropriate; bowling, escape room, etc. and still relish our time as a family.

One tradition we’ve kept: Christmas Eve mass followed by dinner. Only now, we have more family that joins us. Our Christmas Eve dinner out can include anywhere from 6-10 people!

Yes, I still miss Larry, only now the memories bring me joy instead of pain. I cherish subtle reminders of Larry. When I hear “The Drummer Boy” on the radio, I’ll tell the boys, “That was your dad’s favorite Christmas song.”

My biggest pleasure today, my ghost of Christmas present, is seeing the boys picking out Christmas gifts for their girlfriends. They are loving, thoughtful gifts from their heart. Chips off the old block. Larry always gave the best gifts, because they were always well thought, carefully chosen, and from his heart.

I see Larry in each of my boys more and more as they turn into men. It makes my heart swell and yes, the holiday season is becoming my favorite time of year once more.

I know at some point my boys will have families of their own and want to create their own traditions. How I will miss Larry in the future. We were supposed to keep each other company!

There was a time when any thought of the future without Larry would be gut wrenching. But now that my own kids are young adults, I do look forward to a time when I can see the magic of Christmas through the eyes of little ones once more. Way, way, into the future, God willing!

Thankfully, I have wonderful relationships with family and friends, so I know I will never truly be alone.

I pray this season you can reconcile your Ghosts of Christmas and enjoy spending it with family and friends. 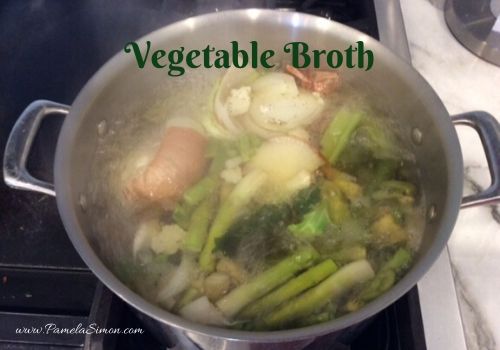 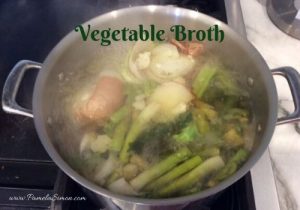 I hope you had a good Thanksgiving. I was ecstatic and blessed to spend it with my 3 boys. It was the first time in a couple years that we were all together on Thanksgiving due to their sports schedule. This year the stars aligned, and travel destinations allowed for us all to come together. We traveled to the University of Notre Dame for a hockey tournament for George and his high school team.

While it was a great weekend, and I love to travel, I came home exhausted and fighting the onset of a cold. All the holiday fixings, eating out, enjoying a glass of wine (or two!) and being enclosed in an airplane (where it seemed like everyone was sneezing or coughing!) certainly put my immune system on high alert.

I’ve mentioned juicing in a previous post, “Boost Your Immune System,” to boost the immune system, but another remedy I can count on to infuse a lot of vitamins and minerals into my system quickly is broth. There’s a lot of hype about bone broth these days, however, I prefer simple homemade vegetable broth.

Vegetable broth contains a vast array of vitamins and minerals that our bodies need. It’s relatively inexpensive and easy to make. I will use the homemade vegetable broth to make soup or I will pour approximately 12-16 ounces in mason jars and heat one up each day and drink it, just like I would a cup of tea.

Between juicing and drinking vegetable broth my cold symptoms will be gone in just a few days. With all the activities I have planned over the next few weeks I need to be as healthy as possible. 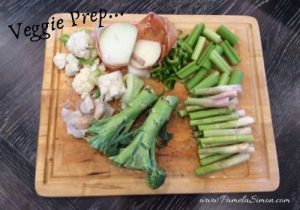 If your prepping your vegetables, see “Meal Prep 101,” then you already have the fixings to make vegetable broth. You can use the vegetables that I suggest, see below for cooking method, or you can choose your own favorites, either way you’ll be left with some awesome broth that you can use immediately or store in the refrigerator for up to five days.

Storage tip: If I’m not making soup that week, I will fill up 12-16-ounce mason jars and freeze the broth. That way I can make myself a bowl of soup any time I want.

Here’s to a healthy and happy immune system!

Servings: 2 Quarts or 4 Pints (for freezing)

Trimmings from celery, include leafy parts

Carrots, include ends and leafy parts

Any other veggie trimmings you have!

Save trimmings, stems, peels, any part of the vegetable you would normally throw out.

Place all the trimmings in a large stock pot, add water to fill ¾ the pot.

Add salt and pepper and bring to a boil.

Boil until liquid is reduced by half, approximately 1 hour.

Fill with more water to bring the level back to ¾ the pot, bring to a boil, then reduce to simmer.

When finished, turn off cook top, allow to cool for 30 minutes, then drain the vegetable trimmings using a mesh strainer to capture all the small pieces. Use immediately for soup or pour into a glass storage container. 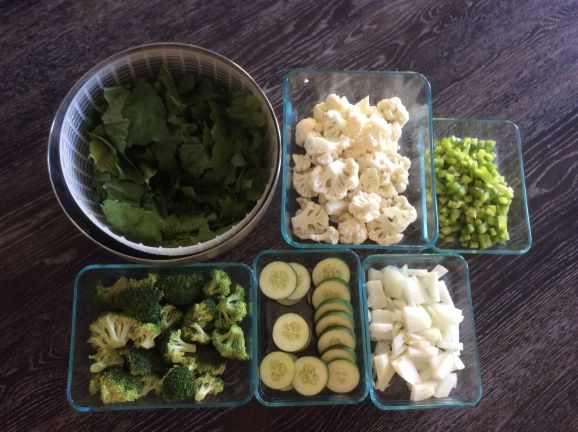 I know I sound like a broken record when I’m constantly advocating to eat a diet with lots of nutrients, as I mention again in today’s post. One of the roadblocks I hear from people is they don’t have time every night to prepare their meals.

I get it, eating healthy does require time to prepare the food. I feel the same most nights. From the time the boys get home from school until dinner it’s pretty hectic in my house. I don’t always have a lot of time to make dinner, especially if it involves washing and chopping vegetables. I’ve found preparing my vegetables ahead of time can ensure I’m able to have vegetables, especially greens, at every meal.

Here are some helpful hints:

Now you can quickly steam, roast or saute your vegetables. Or, have the fixings to put together a great salad!

Want to get Weekly updates?